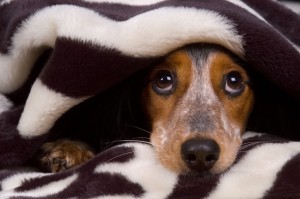 New Year’s Eve. A crack, surging up hiss and … just before the firework goes off and numerous lights of different colours splash the sky, a panic-struck Collie flashes through the apartment and hides under the bed, in the farthest, darkest corner. It soils itself, shivers, breathes heavily with its tongue out and mouth open, looks about nervously, its eyes wide open. In the morning the owners pull the exhausted pet from under the bed and take it for a walk. The moment the dog is unleashed, it runs away. It’s not a runaway or a disobedient dog, though – it runs straight ahead, and doesn’t stop to “read the messages” of its canine companions.

Every year numerous dogs are lost during the New Year’s holiday. Pets run away in panic, over hedge and ditch. Every now and then they are found several days later, sometimes 30-40 km away from home. Unfortunately, in most cases such dogs disappear without leaving a trace. Every year, after New Year’s holiday, dog owners address me with the same question: how to help their pet overcome the condition of stress that often lasts for 2-3 weeks. Some people believe that if their dog isn’t afraid of gun shots, it can’t be scared by fireworks and firecrackers. They are mistaken. Dogs hear a wider sound spectrum. They can be frightened, for example, by the whistle preceding the explosion of a firework, or by earth tremor caused by it. Pets’ fear can also be triggered by simply seeing other dogs stagger back from a firecracker or by the sounds of shouting and cheering crowd.

The advice I’m going to give you can be applied not only to dogs that are afraid of firecrackers, but gun shots as well. I suggest you save the article and forward it to other dog owners. These are “safety measures” of a kind. In other words, an instruction how to prevent your pet from growing a fear of loud noises.
1. The best solution is to take your pet out of town, to a country house for example, where it is more quiet and calm. The worst thing a dog owner can do is leave the pet with “strangers” for the holiday. Away from home and without its owner any dog can easily lose its senses.
2. One week before New Year’s Eve place your dog’s bed (cat’s house or birdcage) in the corridor or bathroom, or other room with no windows. Put your pet’s favourite toys there, give it treats – the pet needs a place where it can hide and relieve its anxiety.
3. When walking the dog, try to keep away from groups of people that might throw firecrackers. Don’t let your dog go anywhere near things that might scare it.
4. Timid dogs mustn’t be let off the leash (one week before and one week after the holiday).
5. If a firecracker goes off nearby and your pet starts looking around with anxiety or fear – stay silent, don’t try to calm the dog down and don’t pet it. Under no circumstances! Put on a brave face and show the dog that there is nothing to worry about and the noise isn’t worth your or your dog’s attention. If your pet looks too scared, take it on a leash and keep walking.
6. Don’t pet your dog or cat for not being scared. Don’t take them to the window to see fireworks. Don’t jump up and run to the window. All these actions draw the pet’s attention to the sound of fireworks and make it anxious, gradually developing the pet’s fear of fireworks or shots.
7. If your dog already is afraid of loud noises, consult a vet on what medicines you could start giving your pet beforehand and which ones will help in case of a panic attack. Remember: the same medicines can have different effect on different breeds. It is also essential to “test” the medicine before the Day “X”, because your pet might be allergic to the drug, and it will be very difficult to find a vet during the holiday.
8. On New Year’s Eve take all measures to prevent your dog from getting over-excited. In a state of excitement dogs are more sensitive to new sounds and smells. Avoid playing with your pet for too long, don’t do clicker-training or any other training, if you know that your dog gets over-excited during such activities.
9. Feeding during the holiday: full portion in the morning and half-meal for dinner and supper. Take your dog for a good long walk in the morning, then at about 14:00 and in the evening earlier than usual (around 18:30-19:00). Even at such early hours you won’t avoid firecrackers/fireworks sounds, but at least there is a much smaller chance to get a firecracker under your pet’s nose. If you have a puppy, let it pee indoors and don’t take it out for the usual late walk. It’s easier to teach a puppy not to soil in the house, than to be brave.
10. Dog-trainers often advise to distract the dog with games and food. Work at the problem in a quiet atmosphere during the year, intensifying the training gradually. Teaching the pet not to be afraid when the cannonade has already started is too late. It is more likely that you will encourage the dog’s anxiety and make the problem even worse. For this reason:
11. Stay out of the way when your dog runs yelping from one room to another or when your cat hides under a couch. Don’t pay attention to them, but keep an open passage to a quieter place (ideally – to the dog bed or cat house we talked about earlier).
12. If your dog huddles up to you and palpitates with terror (in this case only), then wind your arms around it and breathe deeply. Slowly, with a certain rhythm, breathe in – breath out. Do it in silence. You will feel that your pet startles less, its breath becomes more even. Then the dog will try to escape from your arms and keep walking – don’t say anything, don’t pet it nor praise it – just put it down and let go. It’s most likely that the dog will find the quietest corner and will stay there, more or less calm, until the “cannonade” is over.