I made a step forward — the mare has laid both ears back again. I stood for a few seconds and the mare has turned one ear to me. I stepped back. Stood for a while. Step forward again. And so on. I has explained to the mare: if you want to chase me away — you should demonstrate something nice on your face 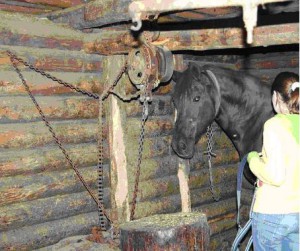 As I told before in my blog, my animal behaviorist career has began with horses. I watched the horses, their interaction with trainers and lectured. At the beginning I provided my advices and trained horses of my friends, familiars or listeners of my lectures only. But once I was called as a specialist by unfamiliar persons and I, being slightly nervous, went to the Moscow suburban village.

The case-record was as follows. The mare was bought by a butcher at private slaughter, but she turned out to be in foal. For some reason the butcher could not slaughter the mare in foal, so he chained her to the ceiling and kept her there. During a few months, he slaughtered the horses, who was her companions for a while, right next door and then carved her congeners right in front of her. Activists from the horses rescue bought her and several doomed animals and transported them from the slaughter. They placed the mare in a spacious stable, and two weeks later she gave birth to a foal. Two more weeks later, her new owners called me, because they were not able to cope with the animal any longer. From the very first day the mare attacked everyone, who approached to her stable. It was impossible to clean her and get for a walk. Cleaning the stable was not possible as well. Even feeding and watering were highly dangerous affairs. “But how did you get the horse into the horse carrier?” I asked. “She behaved well on the slaughter”. This surprised me then and now I understand the reason. The horses from slaughter and dogs from poor shelters typically leave with pleasure and slips out and expresses all the accumulated fears and emotional stresses a few days later, while living in a new home… “Have you tried to do something about it?” “Yes, we pushed on her a little”. “What do you mean — pushed?” “Well, we pushed a little. With a shovel…”

Moreover, I noticed that in attempts to get the mare tamed the roughrider girl treats her, while the mare folds her ears to the neck for dear life. I explained that encouraging the aggression this way she leaves to the horse no chance to understand what the people want from her. Then I came to the stable as close as possible (the mare stretched the head to me, while her neck was bent over the wall, and showing teeth, like a chain dog) and began to move back slowly. When I was about three meters away from the stable, the mare has raised one ear forward and lowered her head a little lower. So I found the distance at which she felt safe.

I made a step forward — the mare has laid both ears back again. I stood for a few seconds and the mare has turned one ear to me. I stepped back. Stood for a while. Step forward again. And so on. I has explained to the mare: if you want to chase me away — you should demonstrate something nice on your face. After a few repetitions the mare took a breather with a whole body and turned around. She does not threaten with crupper, but simply turned away from us. Then she turned around again. I stepped up and moved back a couple of times again and retreated in response to her “correct” ears. The mare made a breather again, lowered her head lower and made a circle around the stable.

“I feel her brains moving!” — the horse owner exclaimed. We left to give the horse a half-hour rest. When we came back, it was a time for hay handout. I took an armful of hay and changed my tactics. Now the mare could invite me (with a desired hay) to get closer only by putting her ear forward. We trained such way for nearly a half-hour, until, finally, the mare could take the hay from the armful. I advised to roughrider to train the mare such way during every feeding. The result was fabulous. Horse owners were less surprised than me. Maybe they were waiting for a miracle, and whan it happened, they were not excited with it. I’ve been waiting for a long and painstaking work with a knocked out animal, immersed in depression, and the “message” perception by the mare seemed unusually fast for me. Three days later, it was possible to get the mare with a foal to the paddock using a headrope, to clean her, wash, and she even allowed to clean her hoofs. I came to them again on the fifth day after the initial consultation. Although the progress was great, it was still dangerous to walk into the mare’s stable, she could only be invited to the gates with a treat. I trained her to walk for pointer using the clicker (usually horses are taught to this skill after just three to five repetitions). I proposed to owners to encourage her standing near the fencing, touching her nose with a pointer, to allow the person to touch her, while staying safe behind the fencing. Then I showed some more exercises for relaxation, desensitization, explained how to get her accustomed to men (the mare feared them stronger and continued to demonstrate the aggression to them) and provided some tips on further foal weaning. 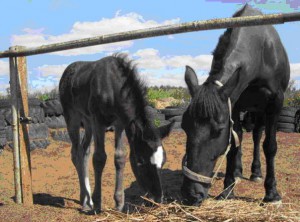 The owner later has wrote in a report on the Equihelp website: “Today, the animal behaviorist has worked with a horse for four hours. I’m tired more than a horse. And when the mare is mistaken, she’s got such a resentful look. But at the same time she started to seek for communication: she literally calls people when they walk away from her”. Six months later I was happy to hear that the mare is working at the farm. It is nice to imagine her rolling a cart on a country road, flushed with a light breeze air, happy and contented, believing to people again.

Here is that horse when she was taken from a slaughter and a month later — with a foal, at the stable of her saviors.